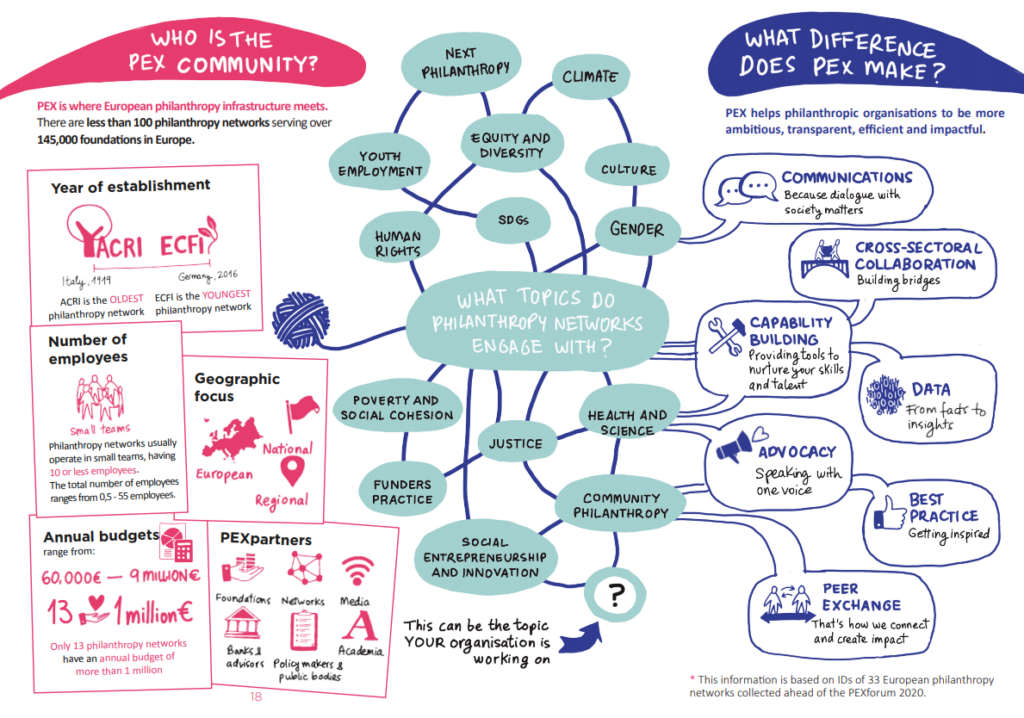 Illustration by Marina Roa from SenseTribe

PEXcommunity, jointly co-created at the PEXforum 2020 in Madrid, stands for collaboration, diversity, creativity and exchange in the European philanthropic sector. It unites more than 60 philanthropy networks, among them national, regional and thematic, organisations.

To break the silos, to make sure that our efforts complement each other rather than compete with each other, to realize goals and ambitions, to create a common European philanthropy identity, we gather representatives of philanthropy infrastructure organisations in Europe, under the PEXcommunity in different formats and set-ups.

Curious about these formats and set-ups? Click on the icons below to discover more.

The first PEX Co-creation Council was set up in October 2020 to design the PEXforum 2021 (27 & 28 January). Later, as a result of the participatory process which is in the very existence of the PEXcommunity, the Council agreed in February 2021 to establish a more permanent Co-creation Council for the PEX to represent the diversity and expertise of the PEXcommunity to jointly develop PEX in the future.

The purpose of the newly established Council is to facilitate collective vision and action, challenge, support and enable PEX. The members of the Council will commit their time, knowledge, experience and networks to continue building PEX as a space for collective learning, imagination and acting for Europe’s philanthropy infrastructure. To achieve this purpose, Council will have general quarterly meetings throughout the year, and preparation meetings for the annual PEXforum.

Join the conversation on LinkedIn!

Want to learn and network?

Find all of the relevant philanthropy events in Europe in the calendar below: